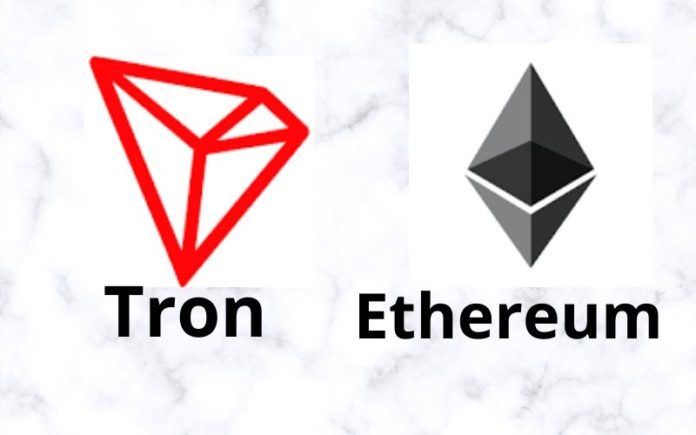 The CSO of Blockstream, who doubles as the CEO of Pixelmatic, Samson Mow has recently aired a number of points that make him believe that Tron (TRX) has come to overthrow Ethereum (ETH) in the top tier of the blockchain industry.

There has been growing fracas between two strong crypto projects in the cryptocurrency space. This was noticed after the CEO of Tron (TRX), Justin Sun and Block.one CEO Brendan Blumer subscribed to the accusation against Ethereum regarding crowdfunding its community members to attack other cryptocurrency projects.

The ranging issue has, however, initiated a comparison between the two crypto projects among the cryptocurrency pundits. At the same time, Justin Sun has not stilled over the issue despite the show of unconcerned displayed by the Ethereum co-founder Vitalik Buterin since the issue started to range until the press time.

The sentimental comparison came about after the CEO of Pixelmatic and Blockstream CSO Samson Mow, who boasts of over 100,000 Twitter followers reacted to a tweet shared by a user identified as Rattics.

The tweet was about many people switching from Ethereum (ETH) to Tron (TRX), stating that he thought the former was top tier.

He said, “Man are you guys mad at vitalik or something, everyone is switching from ETH to TRX.. How come??? I thought Eth was top tier??? It still is right?”

In swift response that sounded like meme, Samson Mow specifically pointed out that “Ethereum is not the top tier anymore”, proving that the Tron CEO Justin Sun has 2 million Twitter followers while Vitalik Buterin has not attained 1 million milestone, let alone reaching 2 million like his counterpart.

He said, “Ethereum is not top tier anymore. Justin Sun has 2 million Twitter followers while Vitalik Buterin has less than a million.”

#Ethereum is not top tier anymore. @justinsuntron has 2 million Twitter followers while @VitalikButerin has less than a million. https://t.co/8TRIwTNL7k

In another tweet to prove that Tron (TRX) is now ahead of Ethereum, Samson Mow mentioned the two significant acquisitions of Tron and the two notable layoffs of Ethereum to back his points.

He said, “Tron made acquisitions like BitTorrent and DLive in roughly the same time frame that Ethereum had two rounds of layoffs (13% and then 14%).”

ABOUT US
Herald Sheets is a website intended to deliver news related to Bitcoin BTC, Ripple XRP, Litecoin LTC, Cryptocurrency, Blockchain Tech, and broad Technology Updates. It is operated by writers and co-workers located at several locations globally. We aim to create high-quality content for our readers of the finance and tech niche.
Contact us: contact@heraldsheets.com
FOLLOW US
© Copyright 2020. Herald Sheets Inc.