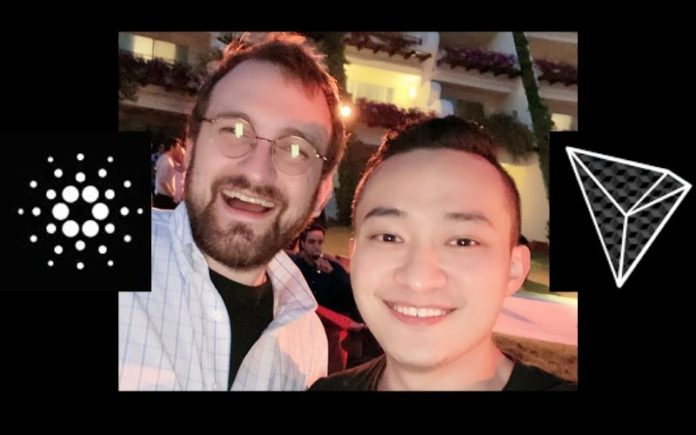 About two days ago, Herald Sheets reported that the CEO of Cardano Charles Hoskinson will be attending and speaking at an annual event called Satoshi Roundtable, where a host of blockchain industry big guns and others will converge to initiate technological enhancing discussions.

The event started on 7th in North America, and it is scheduled to end on 10th February 2020. The colorful moments shared by the cryptocurrency founders and CEOs have revealed the state of the atmosphere in the off the record annual event.

Moments ago, Justin Sun, the founder and CEO of Tron shared the smiley moment with the CEO of Cardano Charles Hoskinson.

The Tron CEO shared this in a tweet where he captioned the shot that has since accrued tons of reactions within the Tron and Cardano community.

The smiley shot reveals the cordiality between the two major cryptographic project CEOs, which is seen as most beneficial to the growth and development of blockchain technology and cryptocurrency.

Justin Sun tweeted this with the captioned, “Having good time!”

Justin Sun was also spoted with another popular entity in the cryptocurrency space, Peter McCormack, who is probably a Bitcoin maximalist.

The moment was shared via Twitter by Peter McCormack. He also acknowledged Justin Sun as the Ethereum killer, which confirms the presence of ranging fracas between the two prominent cryptographic projects as reported by Herald Sheets.

He said, “I’m breaking my no shitcoin rule on the podcast. Couldn’t say no to the #Ethereum killer. Thanks Justin Sun for the exclusive and NVK for the intro. Coming soon…”

I’m breaking my no shitcoin rule on the podcast. Couldn’t say no to the #Ethereum killer.

Thanks @justinsuntron for the exclusive and @nvk for the intro.

Recap of the History of Satoshi Roundtable

Satoshi Roundtable is in its 6th year. It is an annual event with a high level of privacy. This implies that all the activities carried out in the course of the event are completely private and off the record.

This year’s event is ongoing in North America, with the presence of leading developers, CEOs, founders, scientists, academics and investors.

According to information gathered, Satoshi Roundtable can be termed as a unique, interactive, organic, and decentralized discussion structure invented to help people carry out maximum amount of tasks in the most productive way possible.

Jason Rockwood: No Mid or Large Cap Blockchain Is As Green As VeChain (VET)

Cardano Foundation Illustrates Why Cardano (ADA) Is an Obvious Match with...