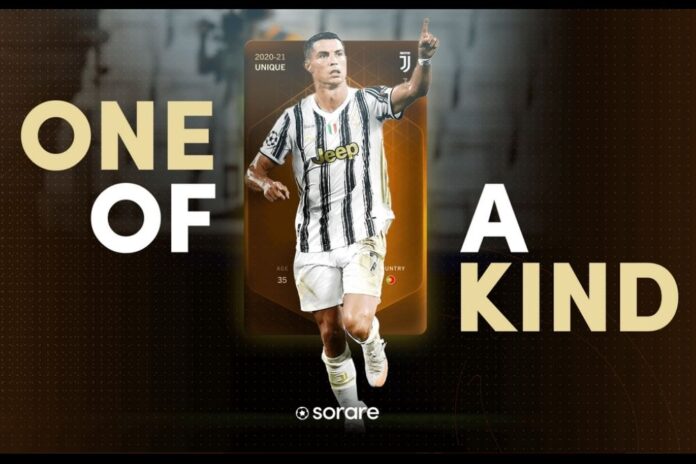 A single non-fungible token (NFT) card of the Portuguese soccer superstar, Cristiano Ronaldo, has been sold on an Ethereum-based fantasy soccer game, Sorare, for relatively $290,000 worth of ETH, beating the selling record held by NBA Top Shot.

The announcement was made about two days ago by the fantasy soccer game platform, Sorare, topping the previous sales of NFTs on the platform.

WOW! 🚀 Congratulations to FC Camembert who has just smashed our #Sorare Market record.

Moreover, Ronaldo’s NFT card is the highest-priced soccer card ever sold physically or digitally, displacing the recent record of $124,230 for the sale of a physical Topps card of Erling Haaland.

Commenting on the motivation behind the purchase, Camembert, a user of Sorare, who also has a number of NFTs in his portfolio, including Varane and Vinícius Júnior NFTs, said:

“Ninety-nine percent of people probably think it is stupid to spend so much on something that you cannot ‘touch.’ My parents don’t get it and think I am a bit crazy. I would personally never buy a Picasso, but I was very happy to invest 300,000 USD in my idol.”

He even claimed that he’s not ready to sell the card if he’s offered higher bids.

Camembert said, “This purchase was not motivated by speculation, I do not plan to sell anytime soon. For me, Cristiano is priceless.”

As the craze of the non-fungible token (NFT) continues, an electronics music legend, Aphex Twin, has also joined a number of artists in the NFT market.

Richard James, popularly known as Aphex Twin, made the official announcement on the major NFT platform, Foundation, on 13th March.

According to the details of the sale of the piece titled “/afx\/weirdcore\” on Foundation, the NFT was sold online for 72 ETH worth around $129,000 at the time of press.

In a tweet on Sunday, Richard James stated that the project will donate a portion of the funds to environmental initiatives and charity:

“We will spend a portion of the money on planting trees and either donating to permaculture projects or setting them up ourselves, depending on how much we get.”

World Economic Forum: XRP Is The Most Relevant Digital Asset For Wholesale CBDC