XRP Holding Key Support. Why a Rally to $0.45 Soonest Is Likely

XRP, the 4th largest cryptocurrency by market cap, retraced from above $0.5 against the USD. XRP is currently holding the key $0.34 support, and there is a possibility for the cryptocurrency to resume its uptrend towards $0.42 and $0.44 areas.

XRP Could Resume Its Spectacular Rally

After a notable break above $0.32, the price of XRP embarked on a strong increase. There was a clear break above the $0.40 resistance level and the $0.50 level.

The price of the digital token even surged above $0.52 and settled above the 100-day simple moving average. Nevertheless, the bulls failed to clear the $0.55 resistance area. A high was formed near $0.5343 before starting a fresh decline.

A break below the $0.42 and $0.40 support levels followed. The price of the cryptocurrency even declined further below the 50% Fib retracement level of the upward move from the $0.2456 swing low to $0.5343 high. Currently, the XRP price is still holding the $0.34 support level and the 100-day simple moving average. 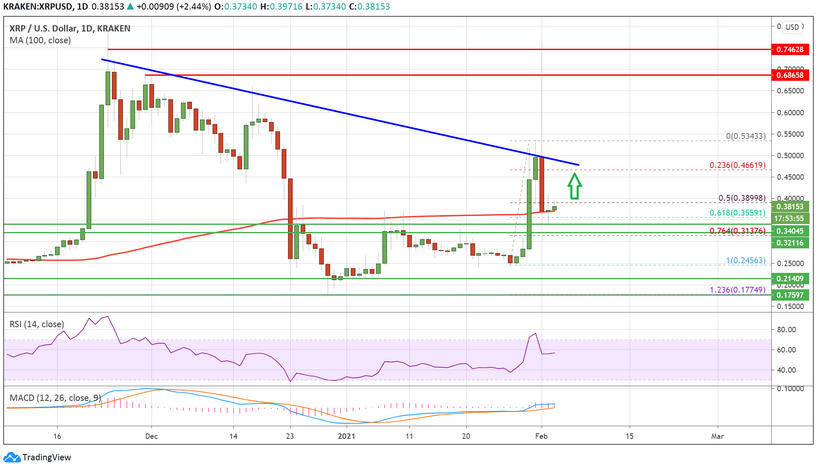 On the upside, the price of XRP is facing hurdles near $0.40. A major bearish trend line is also forming with resistance near $0.47 on the daily chart of the XRP/USD pair.

Is There a Possible Downtrend for XRP Price?

The major support could be near $0.32. So, if the price of XRP fails to maintain its stability above $0.32, it could end in downside extension towards the $0.2450 support level.

A couple of hours ago, an XRP-centric analyst and trader, Credible Crypto, reiterated that XRP has either bottomed or close to a bottom. Since then, XRP has been showcasing a price resurgence.

Credible Crypto tweeted, “I don’t trade fractals but you already know I think we are close to a bottom (a dip to monthly level at .305 still technically possible) and the current PA looks strikingly similar to the last bottom I pointed out before we rallied to .75. Bottom is in, or close to in, on XRP.”

Work Has Started On DigiByte (DGB) Version 8, 2020 Will Be Amazing –Jared Tate Hints

Ethereum (ETH) is a Store of Value –Grayscale Investment

Flare Aims To Provide a Platform for XRP Value to Be...