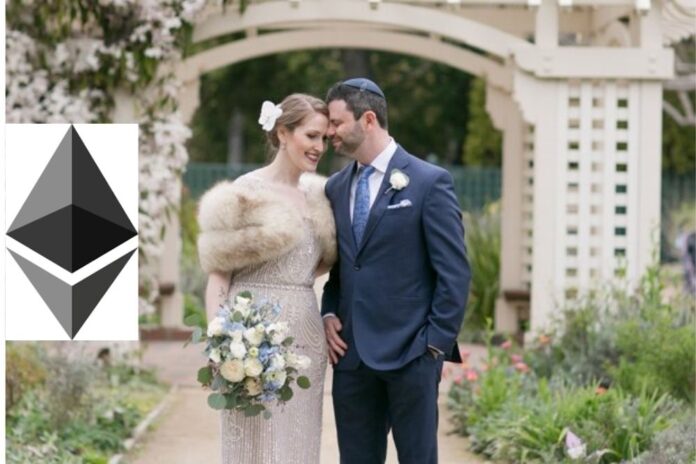 Is there something impossible with blockchain? A couple has done the unthinkable by tying the knot on the Ethereum blockchain, which is the most decentralized way of getting married, for just $537 transaction fees.

In a thread of tweets on 2nd April 2021, Rebecca Rose and Peter Kacherginsky, employees of the largest US-based cryptocurrency exchange, Coinbase, revealed how their lawful wedding was conducted on 14th March on the Ethereum blockchain.

Rebecca Rose tweeted, “Most people get married in a place of religious worship, on a beach, or in the mountains. Peter Kacherginsky and I are NOT most people. We got married on the blockchain.”

Most people get married in a place of religious worship, on a beach, or in the mountains. Peter (@_iphelix) and I are NOT most people. We got married on the #blockchain. 1/7 pic.twitter.com/2ExexrlLbZ

According to Rebecca Rose, in order to make it more unique beyond just a traditional Jewish wedding, Kacherginsky wrote an Ethereum smart contract to solidify their vows in a way it cannot be altered.

The Ethereum smart contract written by Kacherginsky is named Tabaat, the Hebrew word for ring. The contract issued tokenized “rings” NFTs in the form of TBT tokens to the couple’s wallets:

“In addition to a traditional Jewish ceremony, we wanted to solidify our vows in a more personal way. Since we both work at Coinbase, Peter Kacherginsky wrote an Ethereum smart contract for our marriage that issued digital artwork as tokens (NFTs) to our cryptocurrency wallets.

“The name of the token is Tabaat, the Hebrew word for ring. We stored an animation by artist Carl Johan Hasselrot inside the unique tokens, which illustrates two distinct things becoming one, like in marriage.

“We got married on March 14, 2021 at the beautiful @GambelGarden (also the location of our first date AND where Peter proposed). As part of the ceremony we exchanged NFTs, much like rings, by sending them to each other from our cryptocurrency wallets.”

The 2,218 line-long smart contract was created by Kacherginsky on 10th March for a fee of 0.25 ETH worth around $450 at the time of its creation. An hour after creating the contract, three additional transactions, which cost 0.0048 ETH worth $87, were sent from Tabaat. This indicates that it cost them relatively $537 to tokenize their marriage contract on the Ethereum blockchain.

Rose added that “The record of us exchanging these virtual rings will be permanently stored on the blockchain for all to see as proof of our commitment to each other. This is what it looks like on the blockchain explorer etherscan.

Read Also: The Same Ethereum Whale Has Paid another $2.6M to Send 350 ETH

“The blockchain, unlike physical objects, is forever. It is unstoppable, impossible to censor, and does not require anyone’s permission. Just as love should be. What could possibly be more romantic than that?”