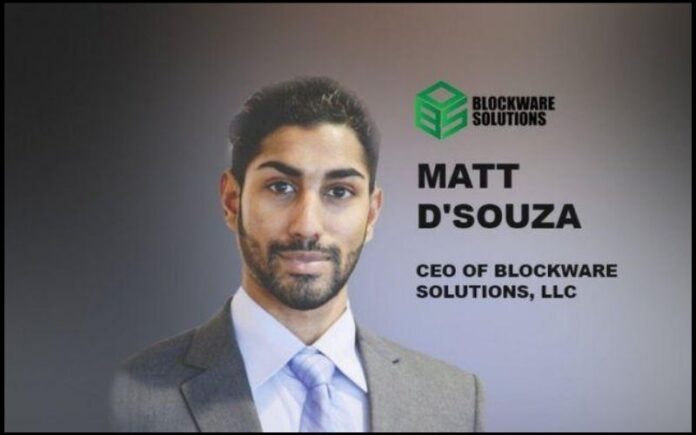 The founder and CEO of Blockware Solutions, Blockware Mining, and Blockchain Opportunity Fund, Mathew D’Souza, reportedly died on 21st August 2020, after battling with leukemia for 7 years. He died at 29.

D’Souza’s passing was announced by Blockware Solutions, a service provider for the Bitcoin mining industry and one of the largest distributors of mining rigs in the United States, which he established in 2017.

The Blockchain Opportunity Fund he founded in 2017 serves investors as a multi-million dollar cryptocurrency hedge fund.

As report has it, Blockware Mining he founded in 2019 has managed to generate 52% returns for its investors:

“Matt came from humble beginnings. At the age of 13, Matt began caddying at the Park Ridge Country Club. He went on to be awarded the Evans Scholarship to the University of Illinois in 2008. The Evans Scholarship is a full tuition and housing scholarship for high-achieving caddies who embody a strong caddie record, excellent academics, financial need, and outstanding character — all qualities Matt possessed.”

During D’Souza’s lifetime, he was a bold advocate for blockchain technology and the Bitcoin ecosystem. On behalf of Blockware, he co-authored detailed research reports and the recent analysis of how the Bitcoin price is influenced by miners.

D’Souza’s legacy may be best defined by his advocacy for his team members and support for his loved ones.

“Despite all of his achievements in the cryptocurrency industry, Matt can be best remembered for his huge heart, strong will and generous spirit, everyone who knew him, loved him.”

According to Blockware Solutions, those who want to honor the memory of D’Souza can donate to the Evans Scholars Foundation.

Bitcoin Has Been Replaced by a Plethora of Cryptocurrencies –John McAfee

Solomon Odunayo - February 9, 2020 0
We use cookies to ensure that we give you the best experience on our website. If you continue to use this site we will assume that you are happy with it.Ok