Virtually all the cryptocurrencies in the market have been enjoying the current price rally that was started by Bitcoin (BTC), the largest cryptocurrency by market cap.

Since other digital currencies joined the rally, digital tokens such as Ethereum (ETH) and Ripple’s XRP have even outperformed Bitcoin based on a weekly uptrend percentage.

Despite the fact Ethereum (ETH) has already given traders and investors reasons to smile by reaching the price level it last reached in 2018, some analysts still believe that the positive trend would continue.

Over the past few days, ETH has printed notable gains. Its recent break above $500 created a momentum it has been building upon for further price uptrend.

Its next trend will possibly depend on its continued reaction to a key level that sits just above where it is trading at the moment.

According to the stance of an analyst, a break above this key level could result in an uptrend towards $850 level. At the time of filing this report, ETH is priced at $567.40, with a 5.28% price increase in the last 24 hours.

The intense momentum seen over the past few days indicates that it may soon erase its trend of underperforming Bitcoin, with the cryptocurrency targeting $600.

A cryptocurrency analyst identified on Twitter as George has stated that Ethereum could soon skyrocket to $850 once it manages to surpass a crucial price level.

He posited that relatively $600 is the resistance to watch, averring that a break above this key level could allow for a significant rally to new highs.

Captioning an illustrative chart, he tweeted, “ETH: Buying here makes little sense to me. I’d wait for reaccumulation around former resistance or for a break above range mean / weekly supply to target $850 next.” 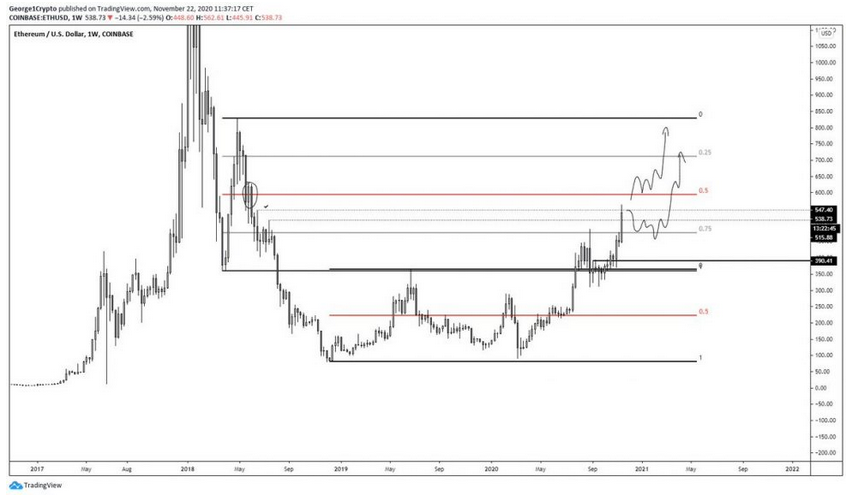 Moreover, many crypto analysts are already envisaging a favorable impact of the upcoming launch of the first phase of Ethereum 2.0 on the trend of ETH price in the market.