The Royal Bank of Scotland (RBS) is a Ripple’s Customer. Find Out!

Ripple, the cross-border payment firm has accrued a lot of customers among the largest banks and financial institutions across the world.

But little numbers of XRP community members know that the fourth largest bank in the United Kingdom (UK) in terms of asset, the Royal Bank of Scotland is also one of the prominent customers of Ripple.

This was hinted via the Micro-Blogging platform Twitter some hours ago by an XRP enthusiast identified as STUARTXRP.

In the tweet, he said, “Fourth largest bank in the UK in terms of total assets Royal Bank of Scotland is a Ripple Customer 694.2 billion GBP total assets 2018.

(NatWest and the Royal Bank of Scotland became subsidiaries in 2019).”

💫
Fourth largest bank in the UK in terms of total assets Royal Bank of Scotland is a #Ripple Customer
694.2 billion GBP total assets 2018
✨

(NatWest and the Royal Bank of Scotland became subsidiaries in 2019) 😉#XRP pic.twitter.com/coxj2ZrpY8

Details of the Existing Partnership between Ripple and RBS

There is a document on the contentworks website titled “Top FinTech Companies of 2019 That You Should Know Of”. There is was boldly stated that “Ripple, one of the few blockchain-based technologies that have received huge traction among global banking giants like Santander and The Royal Bank of Scotland”.

According to findings, Ripple and The Royal Bank of Scotland have been seen together on more than two occasions.

On 18th June 2015, the Chief Administrative Officer of the Royal Bank of Scotland (RBS) announced the bank’s work on a proof-of-concept leveraging Ripple technology, which is part of its £3.5 billion technological revamp

He said, “RBS Turns to Ripple for increased resiliency and automated bank transfer after IT failure.” 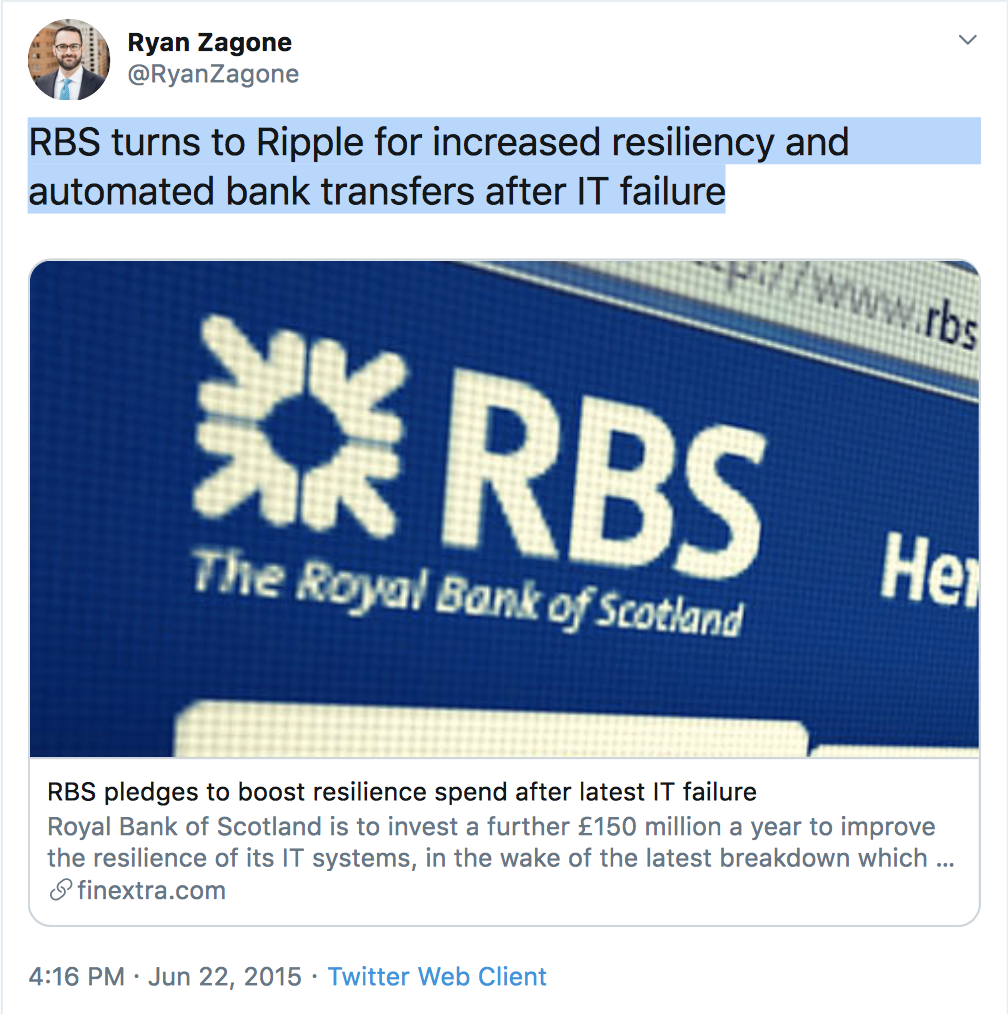 “The deck talked of the bank’s plans to reduce complexity by rationalising IT systems, retro-fitting legacy architecture, reducing supplier count, and investment in Ripple technology for automated bank transfers.”

NatWest and the Royal Bank of Scotland became Subsidiaries in 2019 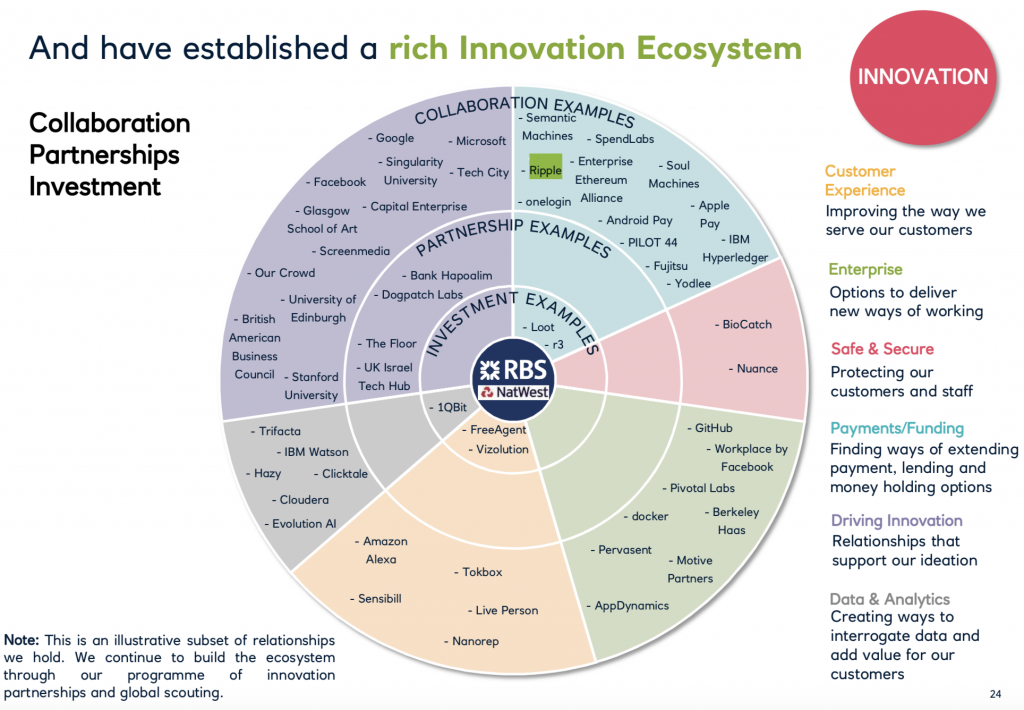 During a “Technology & Innovation Seminar held on 24th June 2019” it was revealed that NatWest and the Royal Bank of Scotland are working with Ripple in line with their plan to establish a rich Innovation Ecosystem for Payments/Funding.

“A team from RBS took top honors at the Deloitte Digital #GoneHacking capital markets hackathon on Friday with a trading platform that utilises the Ripple protocol to handle integration with crypto-currencies.”

“The team at RBS used the open-sourced payments and remittance network from Ripple Labs to add various cryptocurrencies onto the FXMicropay service – those included Bitcoin, Litecoin and Ripple Labs’ own Ripples (XRP).”

“Outside of the core functionality of the trading platform presented at the Deloitte Digital hackathon, the RBS team also explored the possibility of using the Ripple payments protocol and public ledger to replace the existing banking and Swift-based infrastructure.”

“Speaking of the win, the RBS team said they felt the emergence of cryptocurrencies like Bitcoin, and blockchain platforms like Ripple would lead to huge disruption in the capital markets and they, as a bank, wanted to be ready for that change.”

Stellar’s Top Development of the Past Week: Release of Stellar Core v12.5.0