A popular and controversial crypto pundit, identified on Twitter as Crypto Bitlord, has recently taken to Twitter to call the Ripple’s digital token XRP a confirmed scam, adding that he intends to sell off his XRP holdings. But David Gokhshtein has a contrary opinion.

XRP has been widely criticized over the years, due to its slow growth in terms of price despite partnerships and developments that are targeted at increasing the reach of its use cases.

The fact that Ripple owns the most part of XRP makes many members of the cryptocurrency community, including some XRP enthusiasts, to keep blaming the payment firm for the lackluster growth of XRP over the years and year-to-date.

Actually, Ripple, the US-based payment firm owns relatively 60% of all XRP in existence and created an escrow program in late 2017 to manage its holdings.

The firm unlocks one billion XRP from escrow at the beginning of each month, sells a portion, and returns the rest back into escrow. For this reason and others, Ripple is marked culpable for the slow growth of XRP.

In the tweet that has attracted hundreds of reactions, the controversial cryptocurrency enthusiast, Crypto Bitlord, told his over 120,000 followers that XRP is a confirmed scam, stating that he has the intention to sell all his XRP holdings.

In the tweet, Bitlord mentioned Ripple’s act of dumping the cryptocurrency on innocent investors without restriction. Contrary to the general belief in the XRP community, he believes that banks and financial institutions don’t need XRP.

Crypto Bitlord tweeted, “I’m sad to announce but XRP Ripple is: A CONFIRMED SCAM. After years of watching them dump on us and delivering nothing to the token but shit I’ve cracked the code. THEY DONT NEED XRP. If you read this, dump it -I’m selling every last cent. FUCK BRAD AND FUCK RIPPLE.” 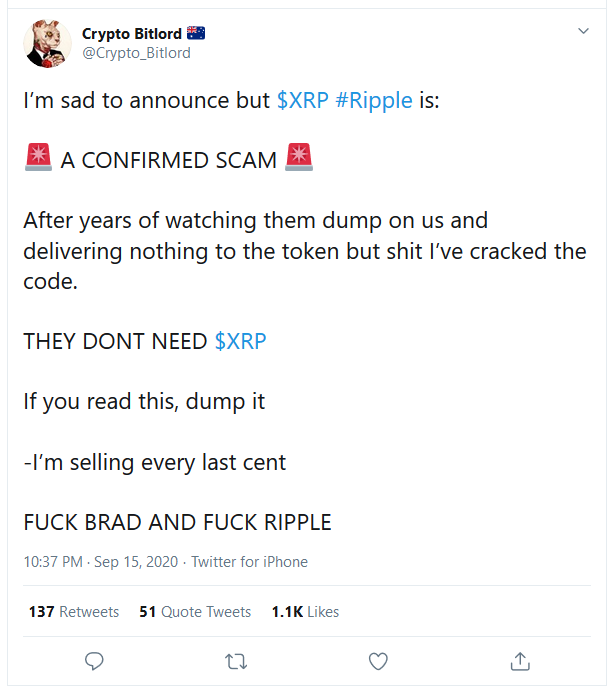 David Gokhshtein Has a Contrary Opinion

David Gokhshtein, a member and contributing writer at Forbes Finance Council, who is also a diehard member of XRP community, stated that whoever calls XRP a scam is tactically waiting for holders to dump it, in order for him/her to buy more.

Gokhshtein tweeted, “Anyone who calls XRP a scam is trying to get your bags.”

Solomon Odunayo - November 17, 2020 0
We use cookies to ensure that we give you the best experience on our website. If you continue to use this site we will assume that you are happy with it.Ok