“Morons” Banksy’s Artwork Burned in Real Life Was sold for $417,000 worth of Ethereum (ETH) 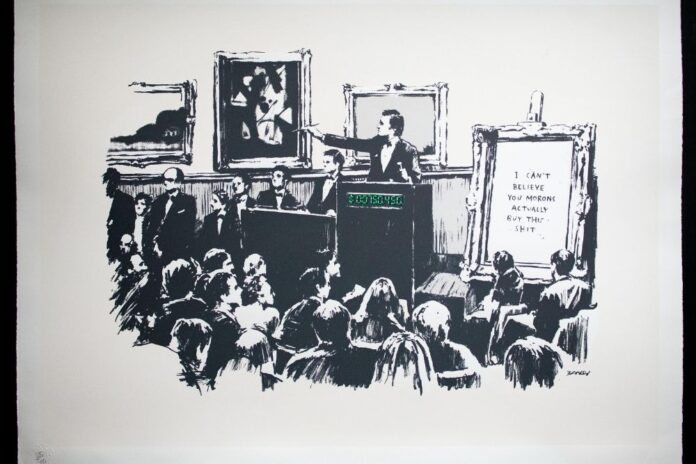 “Morons”, an artwork by the legendry artist Banksy that has now been tokenized, has been sold for over $417,000 worth of Ethereum (ETH) on the Open Sea non-fungible token (NFT) marketplace.

The piece was burned by an anonymous group of crypto enthusiasts a few days ago. It then sold at an auction for the sum of 228.69 ETH, which is trading at $1,817 per coin at the time of filing this report.

As reports have it, Injective Protocol is the firm behind the notable purchase. According to Mirza Uddin, a spokesperson for the firm, the unnamed group has not decided on which charity will receive the proceeds from the NFT auction of the artwork but pointed out that it would be a charity that focuses on coronavirus pandemic.

“Our aim is to bridge the world of traditional art with the world of NFTs. So, we’ll definitely be doing more to uphold this ethos.”

Uddin further revealed that the company is already making another plan with a prominent artist.

According to the anonymous group that burned Banksy’s artwork, “as long as the physical piece exists, the value of that piece will remain with the physical.”

NFTs have been gaining a lot of traction lately with Twitter CEO, Jack Dorsey, auctioning the first-ever tweet on the microblogging platform a few days. Many celebrities across the world are also joining the trend of NFTs, making a fortune from what many could term as worthless.

Why Bitcoin (BTC) Experienced a Huge Price Dump from $12,000 in a Hurry

Cardano: Latest Version of Yoroi Extension Allows Withdrawal of Rewards on Dashboard plus Other Great Features