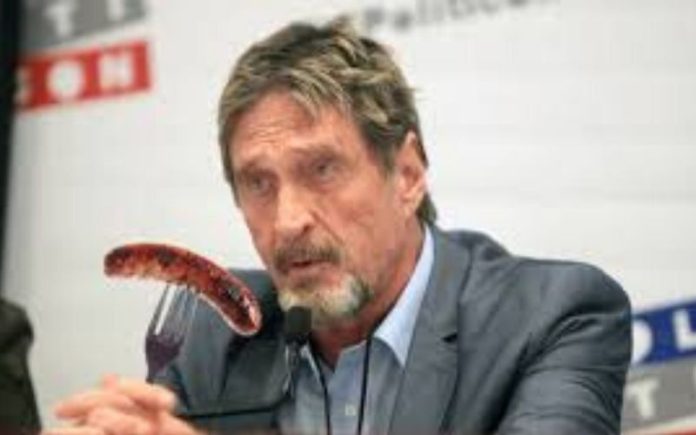 In an exclusive interview conducted during the Virtual Blockchain Week and credited to Cointelegraph, the privacy coin advocate and Bitcoin pessimist, John McAfee claimed he’s 99% certain he knows Satoshi Nakamoto.

During the interview, McAfee described the general belief that an individual, named Satoshi Nakamoto created Bitcoin (BTC) as “nonsense”.

“It was a team of eleven people over a period of five years, that came up, eventually, with [Bitcoin]. How they decided who would write the paper, I don’t know. But anybody who wants to know who it is — I mean, you know who the options are, you’ve got Craig Wright possibly, I’m not going to name everyone else otherwise you’ll figure out who it is, but somebody wrote the whitepaper.”

John McAfee averred that the stylometry initially recommended by the co-founder of Cardano (ADA) and Ethereum (ETH) Charles Hoskinson, is all that is needed to unravel the anonymity of Satoshi’s identity.

“If you read the whitepaper, number one, it’s totally clear he’s English — every single word that has a different spelling in English and American is English,” McAfee asserts.

“If you buy a two-hundred dollar authorship program, and you take the whitepaper and you run it through, and you take any one of the papers that he’s published — all of these people wrote papers by the way, only one comes out with ninety-nine percent probability it’s him.”

Recall that sometimes last year, John McAfee threatened to unveil the identity of Satoshi Nakamoto, but later retracted, after a phone call from the unknown personality. He also reaffirmed that he’s no intention to reveal his identity.

“I have spoken to him on the phone, I was actually going to divulge who he was. Why? Because all of this nonsense was just stupid, people wasting time over nothing — I was going to say, ‘listen, it was this guy.”

“And you know what he told me? Very smart motherf*****, he said ‘Ok, what if you’re wrong?’ He goes, ‘if you’re right, then Satoshi is going to have to hire fifty security guards and change his life, or else he will die.’ Why? Everyone is going to want a piece of him, including the governments that demand that he pay taxes.”

“He said, ‘Ok, if you’re right, then that person has the ability to do something. But what if you’re wrong? You will end up destroying an innocent man’s life forever, and probably cause his death.”

“At that moment, I said ‘I understand, I won’t say no more, and your name will never leave my lips.’ And that is why I never continued past Craig Wright, because the name would have to leave my lips. But if you want to know, figure it out yourself, it’s easy”

WordPress Publishers Can Now Timestamp Their Contents on Ethereum

Solomon Odunayo - January 16, 2021 0
We use cookies to ensure that we give you the best experience on our website. If you continue to use this site we will assume that you are happy with it.Ok