There are indications that Ethereum (ETH), the second-largest cryptocurrency by market capitalization, is poised to extend its current upside move above $1,500.

The top cryptocurrency broke above a consolidation price channel on 6th January 2020, breaking its upper trendline on surging volumes. It formed an ascending triangle that gave traders the impression of a bullish continuation indicator.

How does an Ascending Triangle Develop?

Therefore, if the asset trades upward before forming the said structure, its potential for continuing the trend higher increases following a breakout move through the horizontal line; Typically, the breakout target lurks near the level at a distance equal to the length of the previous uptrend move, otherwise known as “Flagpole.”

Ethereum (ETH) managed to form an Ascending Triangle following its significant price uptrend from $757 to $1,169. The triangular pattern brought about a horizontal resistance line somewhere around $1,127. 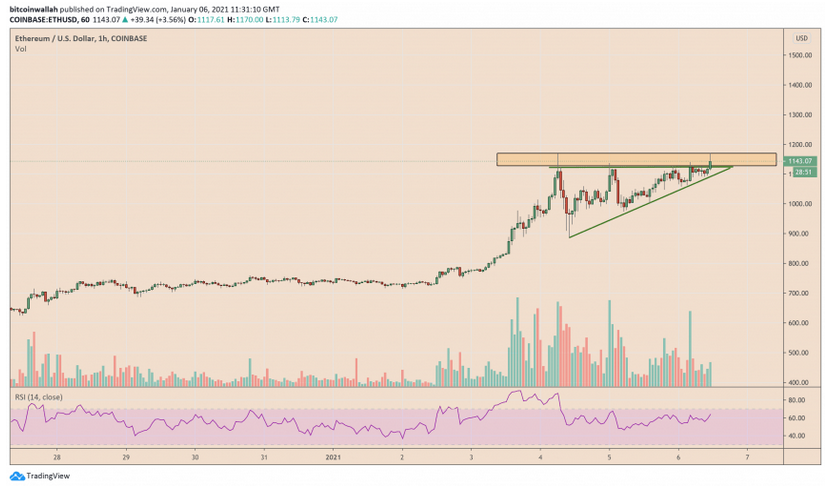 The ETH/USD exchange rate broke the level to the upside during the European session Wednesday, reaching an intraday high of $1,170.

The price entered the colored region, as shown in the chart above. It held the history of sending ETH/USD lower due to higher selling sentiment. So it appears, traders with a short-term outlook profited from the pair’s intraday top on Wednesday as well. Nevertheless, the price remained above the horizontal line, signaling its potential to extend its breakout move upward.

A further break above Ethereum’s session high of $1,168 could prompt traders to eye the Ascending Channel’s breakout target. The flagpole height before the pattern’s formation is around $395. That roughly puts ETH/USD en route to over $1,500.

“Retail demand is absolutely sky rocketing for BTC and ETH with on track to smash their highest single-day volume of $110M. The general public is catching the magic internet money bug, just as a wave of institutional money has begun pouring in.”