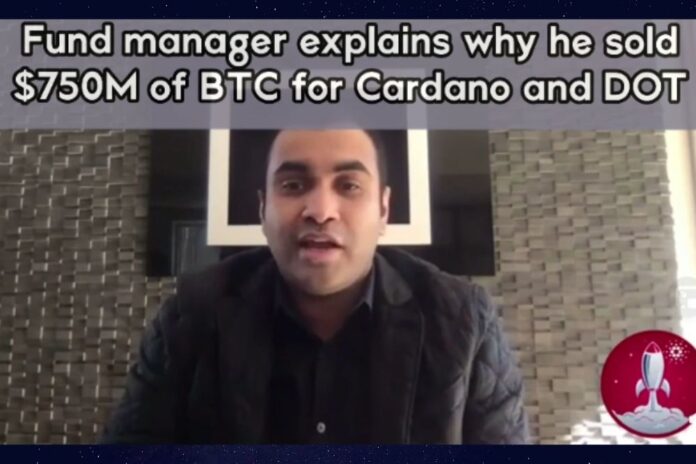 Prakash Chand, the co-founder and managing partner at FD7 Ventures, has explained why the company sold $750 million worth of Bitcoin (BTC) for Cardano (ADA) and Polkadot (DOT).

It went viral a few days ago after it was brought to the public notice that a Dubai-based fund manager took a bold decision to sell-off its Bitcoin holdings in order to purchase Cardano (ADA) and Polkadot (DOT).

Prakash Chand, the managing partner at FD7 Ventures was in an exclusive interview with James Kever of United Stakes of Cardano. During the interview, Chand pointed out that Cardano and Polkadot are rising to the level of Amazon, Microsoft, and Google, stating that it could take the projects 10 years to reach this level.

“In ten years’ time, Cardano and Polkadot will be on the same height, as we talk today about the Amazon, the Microsoft, the Google of this world.”

He furthered by advising inexperience investors to learn how to do intensive research before investing in any digital asset:

“I say this to everyone… People like to say I’m going to buy this because the price is low and going to sell it at this [price]. You know, I’m [against] that all the time. This is a great project for investment.”

Prakash Chand Puts Founders of Cardano, Polkadot, and Ethereum on the Same Level as Elon Musk

According to Prakash Chand, he can’t bet against the founders of Cardano (ADA), Polkadot (DOT), and Ethereum (ETH) due to their track records:

“I look at projects like Cardano, Polkadot, and Ethereum. The founders have a track record, they’ve built something already and I will not bet against them, just like I would not bet against Tom Petty, LeBron James, any of these guys know how to win over and over again. It’s the same way one can’t bet against Elon Musk. That’s kind of the way I put these guys at the same level as these other successful guys.”

“Again, we are just very early in this. You know when people come up to me and say, oh, I’m I too late to the party? I tell them that the party hasn’t started yet. And I tell people that don’t just blindly put your money into this token or this alt token. Even Bitcoin, if you don’t understand it, don’t put your money in it.

“So, my advice for everyone is to spend hours upon hours learning about it. Even before I put my dollar into any of these altcoins, I spend hundreds of hours researching them… Talking to people that are experts in the space and making my own informed decision. So, that’s kind of how I came about making the decision on Cardano [and Polkadot].”

David Schwartz Reveals Major Services in Ripple’s Plan for the Next 5 Years; One of Them Is Trending Now