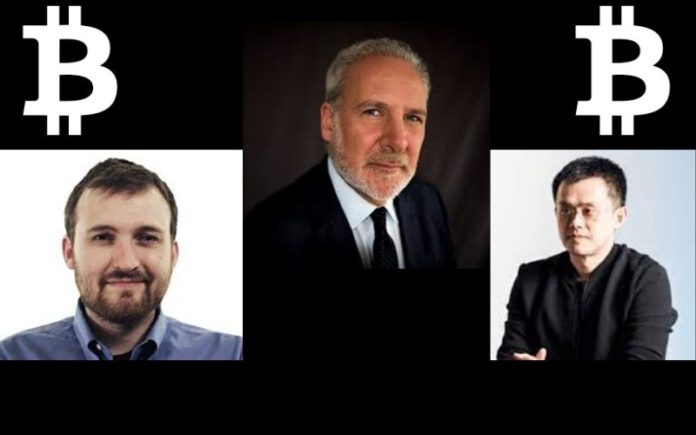 The CEO of IOHK, Charles Hoskinson, who doubles as the co-creator of Cardano (ADA) and Ethereum (ETH), has recently slammed Peter Schiff, the popular Gold investor, and stern Bitcoin (BTC) critic, for sticking to the same old pattern.

Peter Schiff is a well-known critic of Bitcoin (BTC) use cases. And he’s successfully garnered lots of followers on Twitter via his incessant negative tweets regarding Bitcoin (BTC).

Schiff recently attracted the attention of the crypto big guns through a tweet he shared on 6th May 2020. The tweet came in as his usual manner of running after Bitcoin with negative tweets, probably to gain attention.

“A consensus trade is crowded and usually doesn’t pan out as the crowd expects. I can’t think of a more consensus trade in Bitcoin than being long going into the halving, an event that is universally believed to be extremely bullish. So once the halving occurs, who’s left to buy?”

In one of the responses to the tweet, a Twitter user, who is a supposed Bitcoin enthusiast questioned him on why he’s always been tweeting about the digital currency, but not his choice asset, Gold.

“Peter tweets more about bitcoin than he does gold…just proves bitcoin is a far more interesting conversation piece.”

Peter tweets more about bitcoin than he does gold…just proves bitcoin is a far more interesting conversation piece.

Admitting to the act, he said, “I admit I like to rile you guys up. Once Bitcoin collapse I won’t be able to do it as much. So I need to make hay while the sun shines, as it won’t shine for long.”

The CEO of Binance, Changpeng Zhao popularly known as CZ, also joined the thread of tweets by tagging Peter Schiff as a fan that indirectly works for the growth of Bitcoin (BTC).

He added that he tweets about Bitcoin than his supposed choice asset, Gold, and most of his commenters and followers are Bitcoin enthusiasts.

“He tweets more Bitcoin than gold. And his commenters/followers are all bitcoin people. He is the sheep in wolf’s skin. Lol”

He tweets more #bitcoin than gold. And his commenters/followers are all bitcoin people. He is the sheep in wolf's skin. lol https://t.co/UbFHpJ69fd

In response to CZ’s assertion, the founder of Cardano (ADA), Charles Hoskinson pointed out that he has known Peter Schiff’s personality since 2007, and he still has the same old pattern.

“I’ve known him since 2007. Dr. Doom has the same old pattern. The sky is falling, the economy is doomed! Only gold can save us. Everything else is a scam. Bitcoin is bad because reasons xyz. Same pitch for a decade”

Charles Hoskinson: We Will Stay If Cardano Community Wants Us to Stay

Charles Hoskinson: Those Who Took a Very Bearish Contrarian Position on Cardano (ADA) Are Wrong

Bitcoin is Old and Clucky, Future of Crypto Rests with the...