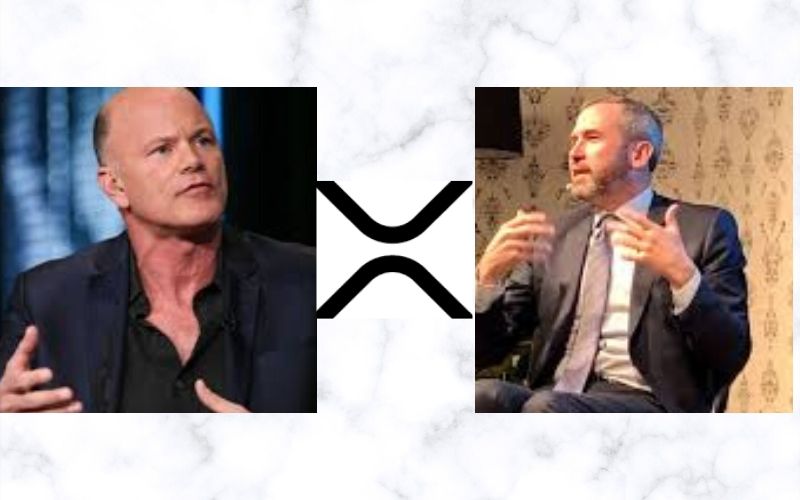 Michael Novogratz, the Galaxy Digital CEO has in a series of tweets elaborated on his trending negative comment regarding the price trend of XRP in 2020 to make peace with the Ripple CEO Brad Garlinghouse.

Some hours ago, the CEO of Galaxy digital was in a conversation with a roomful of financial advisers, there he specifically pointed out that the digital token XRP will have another lackluster year in 2020.

After which the comment was published by the major crypto news outlet, Coindesk. It also became a trending topic on other crypto channels and social platforms.

Due to the possible effect and the FUD that could rise from the trending comment, the Ripple CEO, Brad Garlinghouse took to Twitter a couple of hours ago to refute Michael Novogratz’s negative prediction about the possible price trend of XRP this year.

In two consecutive tweets, Ripple CEO stressed the outstanding performance of XRP in 2020. He claimed that the digital currency has outperformed Bitcoin (BTC) and the broader crypto market in 2020.

He did predict Tom Hanks would win an Oscar for Mr. Rogers – maybe this is the prediction he’ll get right? Personally voting for Brad Pitt though!

He went ahead to taunt the Galaxy Digital CEO, Michael Novogratz by mentioning some of his past predictions that have failed to come to pass, especially when he predicted that Bitcoin (BTC) is destined to hit $20,000 by the end of 2019.

“He said, Also..this is the same guy that said bitcoin will go to 20K in 2019… He did predict Tom Hanks would win an Oscar for Mr. Rogers – maybe this is the prediction he’ll get right? Personally voting for Brad Pitt though!”

Michael Novogratz Elaborates On His Trending Negative Comment about XRP

Michael Novogratz came out a few minutes ago to clear the air regarding the trending negative comments about XRP in a series of tweets. There he revealed that Galaxy Digital is a big investor in Ripple Labs and that Ripple’s success is beneficial to him.

Read his detailed comments below:

GLXY is a big investor in Ripple Labs. I would like to see them do well. Brad Garlinghouse has done a great job as CEO. I commented the XRP tokens underperformed BTC last year because Ripple owns a lot of them. I have been almost solely long BTC for the past 15 months.

This year the broader alt market, including XRP has outperformed BTC. This has surprised me. That said, I see more and more large accounts getting educated and set up to be accumulators of BTC and believe on a risk-adjusted basis it’s the best place to bet on crypto.

BTC has found a place as a weapon in macro portfolios as digital gold – a hard asset. All other cryptocurrencies are venture bets and will only have lasting value if they become a product that is useful. ETH might be the trust level people build on. If it does, it’s a great bet.

XRP and many other cryptos, like ETH are still in the ‘proving’ phase. They aren’t going to succeed as solely a store of value as BTC has taken that lane. XRP does have its own fervent community (largely in Asia) but has a large supply to absorb (some 57 percent or so).

The price of XRP will be determined like all prices. If there are more buyers than sellers (and the company has a lot of control here) the price will rise. The company needs to distribute in a rational way at the same time building a real and scalable use case. I hope they do.