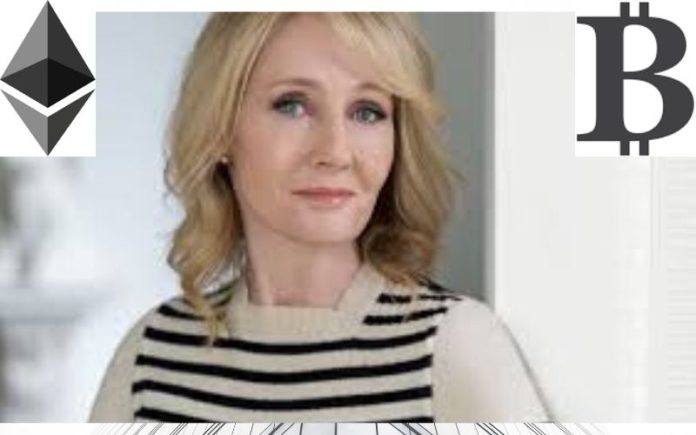 The author of Harry Potter novels, who has been receiving tons of attention from the crypto community members in the past 2 days, has recently claimed that she is trolling Bitcoin (BTC) in the hope of boosting her significant Ethereum (ETH) holdings.

As it was generally reported on crypto news outlets, and still trending on the microblogging platform, Twitter, the billionaire author asked Cryptocurrency community members to enlighten her about Bitcoin (BTC).

This request gave rise to lots of reactions from the crypto enthusiasts. However, J.K. Rowling saw many explanations on the subject matter rather confusing than helpful. She kept making her mind known and she got along with the trend.

J.K. Rowling recently showed up again in an unexpected manner. She tweeted in response to the post shared by a crypto news outlet a few hours ago.

The tweet says, “What are your thoughts of J.K. Rowling joining the BTC community? Time for Potter to go for plan Bitcoin.”

Responding to the tweet, she wrote, “This is getting silly. I’m not joining the Bitcoin community. It should be perfectly obvious by now that I’ve been trolling Bitcoin in the hope of boosting my significant Ethereum holdings.”

However, moments later, she pointed out that the tweet was also a joke.

The CEO of Binance, Changpeng Zhao popularly known as CZ, said he loves the publicity gained by Bitcoin (BTC) and cryptocurrency as a whole since she started trending on the Crypto Twitter. He said no one should be rude to her, but rather play along.

“Bitcoin doesn’t care, but I love it when people with 14m non-crypto followers trolls bitcoin. We should not be rude to them. We should keep their trolling going and act like innocent victims. Lol.”

#bitcoin doesn't care, but I love it when people with 14m non-crypto followers trolls bitcoin.

We should not be rude to them. We should keep their trolling going and act like innocent victims. lol https://t.co/19fPHOmoqk

Bitcoin Whale Drains Wallet Containing $936M worth of BTC for A...