Grayscale Buys $185M Worth of Bitcoin in One Week, Now Has $3.6 Billion of BTC in Its Custody

A report has it that the crypto asset management firm, Grayscale increased its Bitcoin investment with 19,879 BTC worth $185 million within the last 8 days.

This new Bitcoin purchase effected by the investment company now brings the sum of BTC in its custody to relatively 400,000 worth $3,676,924,000, which represents approximately 2% of Bitcoin (BTC) total supply.

This new development was brought to the notice of the crypto community members via Twitter, by a well-known researcher, Kevin Rooke.

In the tweet, Rooke captioned a chart that revealed the notable accumulation of BTC by the crypto asset management firm over the past 8 days. He further stated that the Investment Company now has almost 400,000 BTC in its custody for Grayscale Bitcoin Trust (GBTC)

Sharing his thought about the new development, he wrote:

“Two thoughts: 1. Tough to draw conclusions from last year’s ‘in-kind’ numbers. Need more recent data to know for sure. 2. The larger point is that Grayscale is killing it, and whether money is flowing in BTC or USD, it’s flowing faster than ever.” 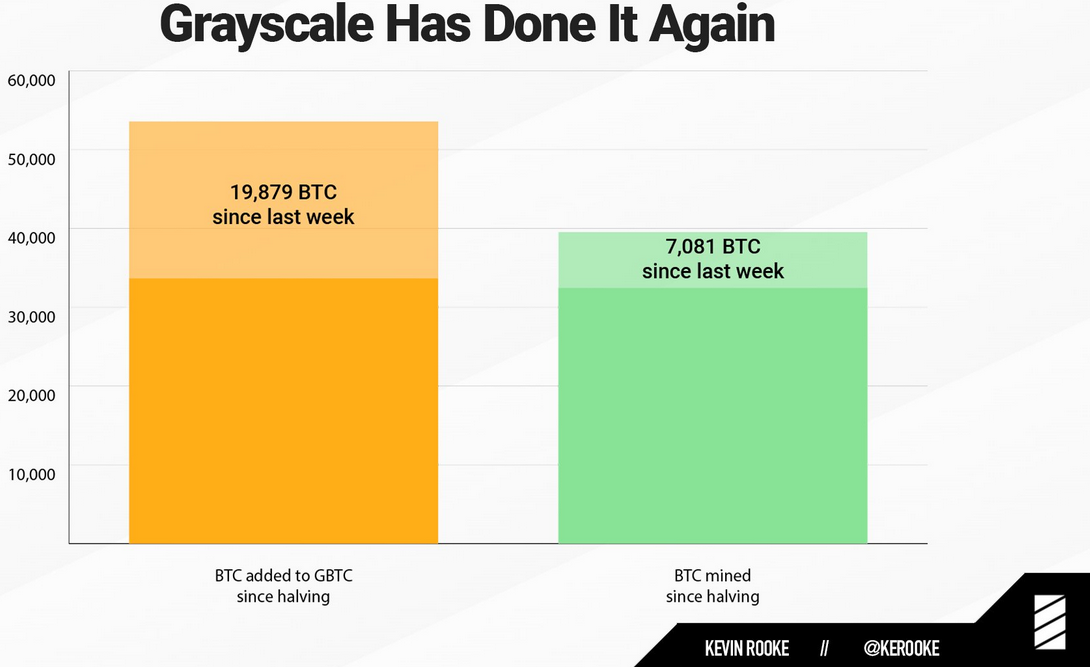 Investors Are Buying Bitcoin (BTC) As a Hedge against Inflation

In a statement credited to Grayscale Investments, investors have shifted to buying Bitcoin (BTC) as a hedge against inflation amidst the money printing spree.

Grayscale tweeted, “As we’ve closely monitored the market in the wake of recent economic policy decisions, we’ve seen that the crypto asset class is not only resilient, but that interest is surging as the monetary stimulus has caused investors to look to BTC as a potential hedge against inflation.”

Going by the official market trend page of Grayscale Bitcoin Trust (GBTC), Bitcoin holdings per share is currently $8.83, while the price in the market stands at $10.14, indicating that investors are paying 15 percent premium.