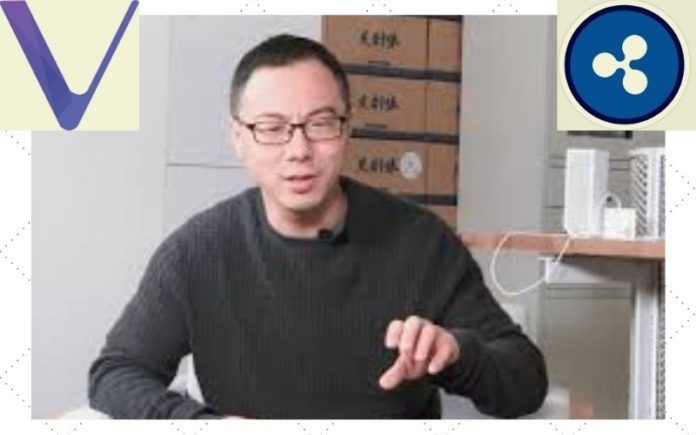 The CEO of VeChain has spoken about the possibility of a collaboration between Ripple, a San Francisco based blockchain tech, and VeChain, a blockchain platform designed to enhance supply chain management.

Sunny Lu, in a recent interview on YouTube, stated that both Ripple and VeChain would make a good partnership in the future since the two companies focus on different missions in the industry.

The Rumor about Possible Partnership between Ripple and VeChain

A popular YouTuber, Crypto Eri, hinted that a possible partnership is cooking between SBI Holdings, a prominent Ripple customer, and VeChain.

According to Crypto Eri, a Japanese news channel stated that SBI Holdings has a ground plan to build a blockchain solution in collaboration with CTIA for rice exportation.

Going by the update, the agreement will also include Hakusho Market to export and sell rice to some parts of North America and Asia.

SBI Holdings is getting into the #VeChain space. Traceability as a service. Building a supply chain platform for agricultural products utilizing blockchain/distributed ledger technology. https://t.co/bnmYVRNgKb

The report has since gone viral in the cryptocurrency ecosystem, as many envisaged that a partnership could be upcoming between Ripple and VeChain.

In an interview held before the partnership rumor broke out, CEO of VeChain, Sunny Lu said that Ripple and VeChain could make a good partnership in the future.

The conversation was held on YouTube with Digital Asset Investor. The fact that Lu’s statement about a likely collaboration between the duos came before the trending rumor, implies that the CEO is definitely looking forward to such a notable deal.

In the course of the interview, Sunny Lu averred that VeChain and Ripple will make a good partnership in the industry since they aren’t competing with each other. He said VeChain focuses on transparency in the supply chain industry, while Ripple centers its focus on payments across the world using XRP, RippleNet, and other payment tools alike.

He was further asked if there has been a formal discussion with Ripple about the partnership. In response, he said his focus his still fastened on building a better environment, which is expected to precede other developments.

How the Recommended Regulation of Stablecoins Could Favor Bitcoin (BTC) and...